“A REMARKABLE STORY...
A long-lost letter transcends
time and death in this moving
tale of a mother's love and the
strength of the human spirit.”
– The New York Times

“A FASCINATING,
MOVING STORY…
We Urge Everyone
To See This Documentary.”
– Israel Broadcasting Authority (IBA-TV) 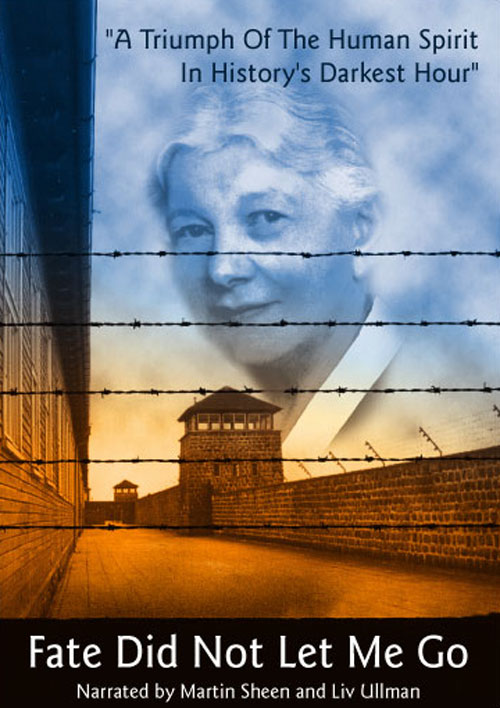 Narrated by Emmy Award® winner Martin Sheen and Academy Award® nominee Liv Ullman, Fate Did Not Let Me Go tells the story of a mother’s farewell letter to her son written just days before her death in a Nazi concentration camp.

Co-directed by acclaimed Croatian filmmakers Jakov Sedlar and Dominik Sedlar with a script supervised by Academy Award® winner Barry Morrow (Rain Main, 1988), the film intimately captures a family’s journey from the destruction of war to the triumph of physical freedom and spiritual redemption.

This award-winning documentary has been shown on 162 PBS stations across America, and translated into more than 15 languages for international broadcast. In 2014 alone, it has been seen by 20 million people in 22 countries.

On December 4th, 2007, Fate Did Not Let Me Go had its Israeli premiere at The Yad Vashem Visual Center in Jerusalem. The film's debut screening audience included the Ollendorff family, Rabbi Jack Bemporad, director Yakov Sedlar, and survivors from city of Breslau.

“This is a letter of hope that affirms the dignity of all human beings.  The letter captures her faith and that there is a purpose to things.  It is a letter full of love and affection, and yet there’s a kind of wisdom to it, and it’s this wisdom that astonished me.”  – Rabbi Jack Bemporad

“His Holiness Pope John Paul II has asked me to express his gratitude for your gift of an illustrated edition of the farewell letter which your grandmother sent to your father before her deportation to Theresienstadt.  He appreciates the sentiments which prompted this presentation and he joins you in praying for the dawn of a new era of understanding and cooperation between Christians and Jews.  Upon you and your family His Holiness cordially invokes divine blessings of joy and peace.”– Leonardo Sandri, Secretariat of State of the Vatican

© Copyright 2008 - The Ollendorff Center. All Rights Reserved. Terms of Use